A state of the unions

Unionization in news organizations is nothing new. For Columbia Journalism Review, labor reporter Steven Greenhouse chronicled the explosive growth in news unions in the 1930s, during which organizing occurred in union-friendly locations such as New York, Boston, Buffalo, Cincinnati, Cleveland, Duluth, Minneapolis, Philadelphia and beyond.

As working conditions have grown more unstable, unionization has grown across the board — even in places where unions aren’t historically present.

A quarter of the labor force in newspapers, radio, broadcast TV, cable and digital news has been reduced between 2009 and 2020, according to Pew Research Center.

According to the 2020 Expanding News Desert report by UNC Professor Emerita Penelope Abernathy, the 25 largest chains owned a third of the 6,700 newspapers in the country and 70 percent of the 1,260 dailies in 2019 — a figure that has likely increased during pandemic acquisitions and mergers.

At the same time, newsroom salaries have not kept up with inflation; it’s not uncommon to see a position advertised for $16 an hour in local news.

In response, a new wave of unionization has been seen — according to NewsGuild, there was about a 500% jump in workers joining the NewsGuild union from 2017 to 2018. More than 6,000 of The NewsGuild’s 25,000 members have joined since 2015 at more than 120 newly unionized publications, both local and non-local.

“I don’t know another private-sector union that’s growing that fast,” said Jon Schleuss, president of NewsGuild and vice president of Communications Workers of America. “It’s a lot and it’s a moment we have to engage in.” 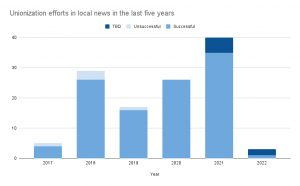 Tony Daley, research economist for the Communications Workers of America, said most recent organizing campaigns have succeeded, either by an election run by the National Labor Relations Board or the company voluntarily recognizing a majority of employees’ signed cards.

In fact, a majority of the largest local newspapers are unionized, Daley said.

“There are a few papers that aren’t — Tampa Bay, Houston Chronicle — but I predict that they will be organized, too.”

News Guild-CWA publicly joined the debate over news industry consolidation on April 27 by filing comments to the Federal Trade Commission and the Department of Justice. The comments requested a more stringent review of mergers and acquisitions in light of questions about quality, subscription prices and wages.

NewsGuild wrote that “In addition to its impact on the marketplace of ideas, this duopoly (of Gannett and Digital First Media) has implications not only on quality and advertising and subscription pricing downstream, but also on wages upstream.”

“The duopoly is able to suppress wages in the local news ecosystem in at least two ways. First, wages within job advertisements are advertised at a comparatively low level…” the comments state. “Second, besides depressing wages below competitive levels, this duopoly can demand more work than it could in a competitive market.”

On the whole, nonprofit newsrooms fared well during the pandemic — but a few news organizations did lay off employees, including three employees lost at VT Digger. In response, the staff of VT Digger unionized in April 2020, citing concerns regarding the pace and rigor journalists experienced at the largest news organization in the state.

MinnPost, Grist, Crosscut/KCTS 9 and others have also unionized, stating the need for more competitive and transparent salaries, more voice in determining benefits and working conditions, a bigger part in shaping the workplace and more.

Paul Cheung, CEO at The Center for Public Integrity, said nonprofits — which are often small organizations — don’t face the same performance pressures as large for-profits, but experience challenges in the operational side of the organization. 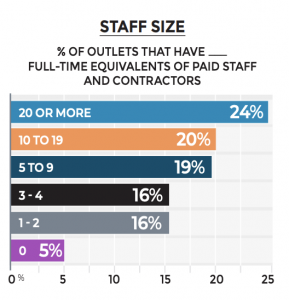 “Because most nonprofits don’t have an HR team, there’s likely not a strong enough feedback loop (to meet employee needs). The founder has so much stake in the organization that, do they have the right resources or tools to shepherd the organization?” he said. “I think in a sense, having a union provides some guidelines and boundaries.”

The Center of Public Integrity unionized in March 2020 and had a contract negotiated in April 2021, two months before Cheung started at CPI.

“(CPI employees and I are) both in this place because we believe in this mission and we have to (work together to make it happen),” he said. “Most of the negotiation is, how do we make the math work?”

Public media faces similar issues, though with a clear focus on equity and culture. The union representing KCRW employees cited pay equity and a more diverse workforce as bargaining priorities; WBUR’s union cited the desire “to foster a culture in which workers feel safe, trusted and appreciated, where our ideas are recognized and our concerns are respected.”