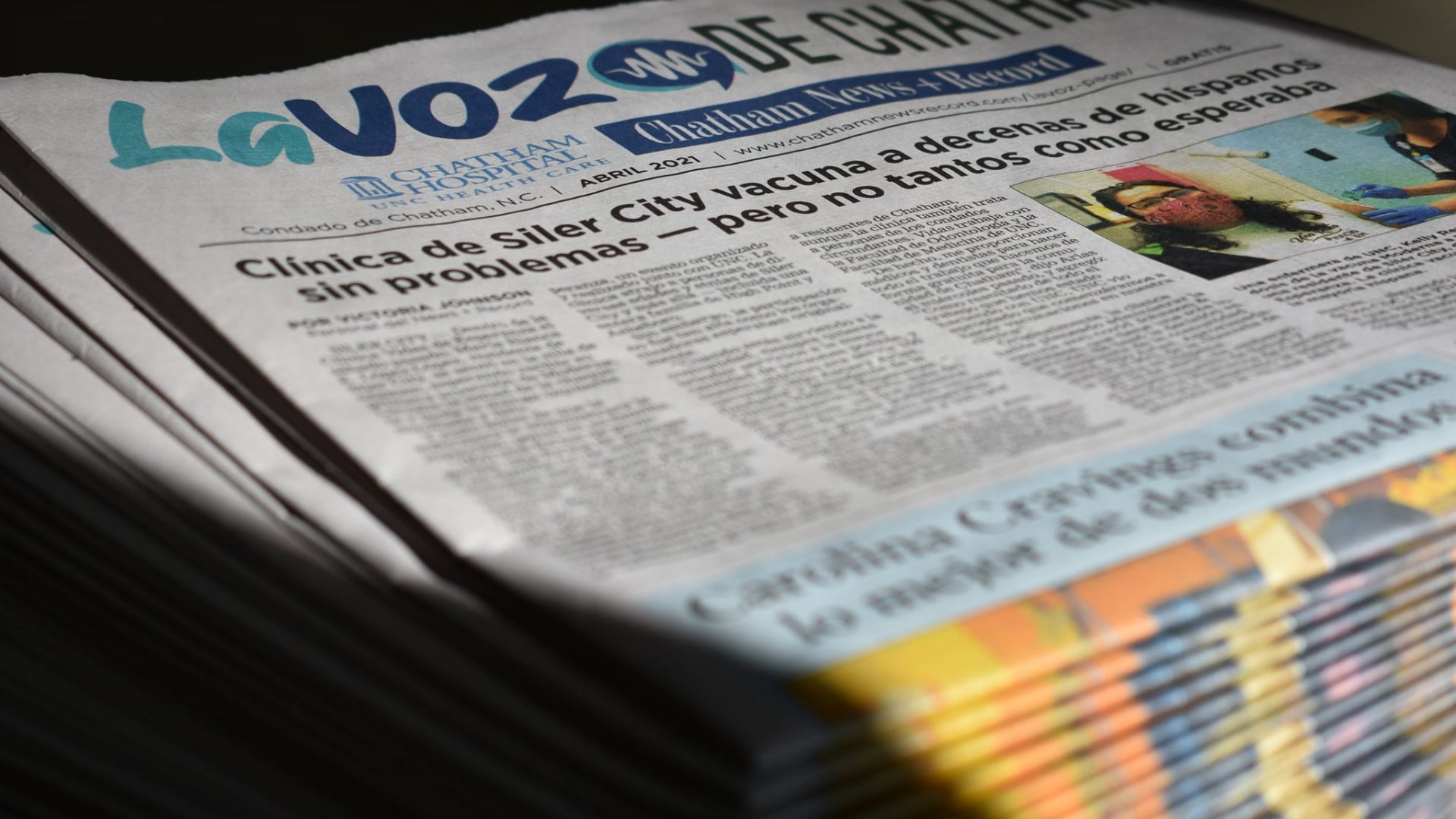 Last year, when the coronavirus pandemic arrived in central North Carolina’s Chatham County, it hit the county’s Hispanic population the hardest. This inspired the team at The Chatham News + Record to create La Voz, a section of the newspaper dedicated to providing essential health information for the Spanish-speaking community.

Bill Horner III, publisher and editor of the News + Record, a current UNC Table Stakes cohort member, said ‘the voice of Chatham’ initially started out as a three-month-long project, ending with a one-time La Voz print publication. Horner said the articles are posted on multiple platforms, published first in the weekly English print edition of the News + Record. They are then uploaded online in both English and Spanish on the La Voz page. This page includes content created for the publication and other essential news articles from the News + Record that have been published in English.

In Chatham County, 12.1 percent of the population is Hispanic – one of the largest in the state, according to census data. The growth created a gap in coverage for the News + Record, which has traditionally only published news in English. When Horner had an opportunity to apply for a Facebook Journalism Project COVID-19 Local News Relief Grant, the La Voz de Chatham project was born.

“The idea was because of this Facebook grant that was designed to serve an underserved community,” Horner said. “We had heard from the health department that as the number of cases grew, the Hispanic population was disproportionately impacted by COVID. We knew that there were stories to tell there, so we focused the grant application on a short-term project to look at COVID’s impact on the Latinx community.”

What started out as a three-month-long project has expanded into something more permanent. La Voz de Chatham has celebrated its one-year anniversary, and Horner said the paper plans to continue building upon it.

“A year and a quarter later, we’re still doing the project,” Horner said. “We went from having basically little or no engagement with the Latinx community to having a lot of engagement.”

In April, La Voz de Chatham released its first Spanish print edition – mailing 2,500 copies of the paper directly to Spanish-speaking homes. The first print edition was a collection of the most relevant and impactful articles from the past year, including stories unrelated to the pandemic. Victoria Johnson, lead reporter for La Voz, said the project’s focus has broadened since its first publication.

“We quickly found, even in the beginning stages of the project, that we wanted to go beyond just COVID coverage,” Johnson said. “We wanted to celebrate the community – to make sure that they felt like they belonged and could see their faces. That was the purpose of the project, to be a voice for Chatham’s Hispanic community.”

“We wanted to celebrate the community – to make sure that they felt like they belonged and could see their faces. That was the purpose of the project, to be a voice for Chatham’s Hispanic community.”

Since it first began, La Voz de Chatham has had an impact on the community: local businesses featured reported increased business, Johnson said, and community members have expressed support and gratitude.

“Last year, after I was talking to a mother about remote learning, she just mentioned out of the blue ‘thank you for taking our opinion into account,’” Johnson said. “… as if it’s never really taken into account.”

One of the forces behind the addition of a print publication was Table Stakes – coaching and change-management education that equips local news organizations to meet the future. The Table Stakes’ focus on meeting audiences where they are – and gathering metrics to understand where audiences are – helped the News + Record realize some audience members weren’t interacting with digital content, Horner said.

“Table Stakes really helped provide the impetus to move forward on the print edition,” Horner said. “If people aren’t on Facebook or going on our website, they’re not seeing it. Being able to go to the households we know in Chatham County where Spanish is spoken, to reach them… I think that was the biggest takeaway from Table Stakes.”

The UNC connection to La Voz de Chatham doesn’t stop at Table Stakes. Working alongside Johnson are two students from UNC Hussman School of Journalism and Media: Patsy Montesinos, a 2021 graduate and current La Voz de Chatham employee, and Olivia Rojas, a third-year journalism student and intern. As part of the coverage team, both have produced content for the online and print editions of La Voz. Montesinos produced short-story documentaries and translates articles. Rojas has written columns about her reactions to DACA legislation (Read Rojas’ columns in English and Spanish) and her identity as a 3rd generation immigrant (English; Spanish).

Rojas, who grew up in neighboring Lee County, said it’s empowering to be a part of a local news organization amplifying stories that have previously been ignored.

“It’s been great to see an active interest in wanting to tell these stories,” Rojas said. “Looking at a rural place, especially, and being able to find these really valuable stories – it just creates a more enriching media consumption. You’re creating an opportunity for yourself to hear about another person’s experience.”

Looking to the future, The News + Record is continuing to expand its outreach to the Spanish-speaking community of Chatham County by implementing new audience engagement strategies. The paper is already planning its next three print editions of La Voz de Chatham and is also looking into starting an email newsletter.

“Engagement is the one piece that we’re really trying to grow,” Horner said. “We’re doing a lot of work right now, working to grow our audiences on every single platform.”

Note: This article has been updated to reflect the publication style and process of The Voice of Chatham.