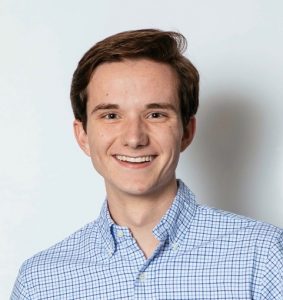 In a media climate where journalists, academics, civic leaders, students and more are quickly understanding and prioritizing a need for support in local news, rising junior Preston Fore may have a better understanding of the landscape than most college students.

As an intern for the Center for Innovation and Sustainability, he fields requests and questions about the News Deserts database — meaning he’s been through the data forwards and backward.

“It should be a concern for students that a lot of big organizations are buying up newspapers and transforming them,” he said. “They’re not able to have that local news angle and they’re tied to stock market position. It’s important to have local community-based journalism, and even nonprofit journalism.”

Fore also covers the growing movement of Congressional support for local news for CISLM, expanding on the work pioneered by the Rebuild Local News coalition and creating a database of bills, co-signers, committees, and more that have shown interest in launching local news support programs.

His interest in journalism didn’t start with the News Deserts project, which he’s been working on since Spring 2020. It started with his love of watching local news on television that developed in middle school. He joined his high school newspaper, overcoming shyness — a rite of passage for many young journalists — to work his way from staff writer to editor.

“It was my favorite thing ever,” he said. “(My journalism class) drove me to have the passion to study and be a good student and continue to drive my passion for journalism and politics, especially 2016.”

Fore knows the need for support is directly correlated to accountability that’s demanded in a healthy local news ecosystem.

“(In an ideal world) news organizations should be locally owned and have reporters made up from that local community who are able to report what’s going on in local government,” he said. “They should hold local leaders accountable for their actions and ensure that there’s just and fair behavior going on.”

At The Daily Tar Heel, Fore puts this ideal into practice as a senior writer on the University desk, where he’s covered UNC’s growing budget challenges, explained the Board of Governor’s power structure, and covered a bill that could allow the UNC-System president to cut salaries across the board.

Fore is from the mountain town of Chattanooga, Tennessee — but his sights are set abroad.

A double major in journalism and global studies, he’s always been interested in international affairs and international journalism. He’s currently interning remotely at the U.S. Embassy in London, working in the public affairs office. He contributes to the Embassy in a similar fashion as his work in CISLM.

“I solve problems and I help people,” Fore said.

The role is just a taste of what’s to come as he plans to study abroad in London in the Fall.