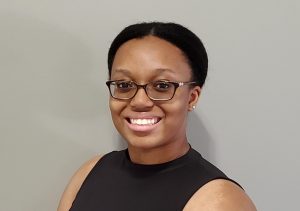 As a rising junior, Brianna Atkinson has considered what her dream job may look like.

It isn’t a reporting gig at the Washington Post or The New York Times — it’s to become a local news reporter in her home state of North Carolina, combining her love of journalism with her passion for helping people.

“Local news brings something to a community that national news could never bring,” she said. “We’re the ones there opening the doors and getting people information to make their home better.”

That love for local news helps fuel her work at the Center for Innovation and Sustainability in Local Media, where she runs CISLM’s social media and covers local news innovation across the state.

Through CISLM, she’s excited to support others with the same dream as her.

Though her path now has led her to local news, that wasn’t always the case.

Atkinson is a double major in journalism and psychology — but growing up, Atkinson dreamed of becoming a pediatrician, helping children heal. She enrolled in a nursing program at an early college to find that she enjoyed hearing the stories of the folks who would come in, but perhaps not the healing process itself.

“I liked helping people, but wasn’t fond of the queasiness,” she said.

A love of journalism runs in her family. Her mom wanted to be a journalist but ended up switching to an English major in college. Atkinson always loved to write and, throughout Atkinson’s childhood, her mom would complement her writing — never pushing her into journalism but inspiring her love for it.

With her cousin and friend from middle school, she joined the Explorer Post 5 program at WRAL, a program for young adults, ages 14 to 20, who have completed the eighth grade for those interested in learning more about television broadcasting.

She brought her talents to The Daily Tar Heel, where she’ll be an assistant editor for the University desk in the fall. At UNC, Atkinson said the discussions she had in her J-school classes cemented her belief. Especially in Media Law, she’s come to appreciate that there are so many opinions on a single topic — in her eyes, nothing is black-or-white.

That sense of nuance has inspired Atkinson to find power in community-driven stories, or stories written in tandem with community members.

“I really like the stories that are collaborative with the community, stories where they’re not, this crime happened here,” she said. “I feel like community-centered reporting is important because it gives the community a voice.”