The hour-long discussion served not only as an overview of the panelists’ research efforts, but also provided a deeper dive into their research methodologies, as well as the challenges of documenting a problem that often requires both intensive, in-person manhours as well as the latest in computational technology.

“When you’re looking at news deserts … or trying to measure either news quantity or news quality, the question always becomes ‘How do you go about doing it?’,” said Abernathy, as she introduced the methodologies behind her team’s latest report on U.S. news deserts, which includes a national database of media outlets, annual surveys of press associations, daily monitoring of news articles and further independent research.

Released in June 2020 by the UNC Center for Innovation and Sustainability in Local Media (CISLM), “News Deserts and Ghost Newspapers: Will Local News Survive?” — the fourth in a series of reports from Abernathy published since 2016 — offers an assessment of what has been lost in local media over the past 15 years, as well as identifying major challenges and opportunities for rebuilding local journalism in the decade ahead.

Abernathy noted that since her first report, “The Rise of the New Media Barron and the Emerging Threat of News Deserts,” was released in 2016, her research has expanded to include not just a study of news outlets’ quantity, but an examination of their quality as well, and she says that is where the manhours come in. An algorithm can spot an article about a local government meeting, but a human read is needed to discern the difference between a short brief announcing a meeting and a detailed article listing the meeting’s issues. 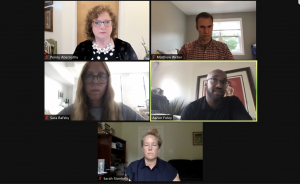 “We really need to focus not just on the number of stories, the number of news outlets, but whether they are serving the community with the types of information that it needs for both its businesses and its residences,” Abernathy said.

Foley echoed those thoughts, noting that finding news quality also meant redefining what is considered news as consumers’ information habits change. “How exactly do we define local news when it pertains to Black communities? Is a one-man band with a blog or a very lively Twitter feed a news outlet?”

The panelists agreed that the methodologies and findings of their research often overlapped. For example, the researchers have an interest in how nontraditional media — such as college, nonprofit and digital media — are filling the gaps left by the closures and staff reductions of legacy media.

There are positives in this trend — Weber’s team found that the presence of a university had a positive effect on the likelihood a community had original local reporting.  However, there are also challenges. Abernathy noted that the numbers of outlets and journalists added by nontraditional outlets like nonprofit and digital media often did not equal the numbers lost by legacy media.

“There’s so much great work happening,” Stonbely said. “I love how much overlap there is and how much we’re going to be able to build on what everyone else is doing.”

Watch the Tow Center’s next webinar in their series on the local news crisis, Redefining the Local News Crisis: Community Centered Models, on Sept. 16.