Those of us who have been in the media industry for years have seen it grow and change in unexpected ways. And, those who pivot successfully amid a shifting landscape often have to demonstrate extraordinary grit and discipline to get through.

At the UNC Center for Innovation and Sustainability in Local Media (UNC CISLM), we’re helping journalists and media organizations develop the mindset to succeed. We do this through our Table Stakes Initiative, which is part of the UNC-Knight Foundation Newsroom Initiative. Table Stakes is a collaborative effort designed to help local and major metropolitan news organizations across the country learn to prosper as sustainable digital newsrooms that are dedicated to the kind of credible news coverage communities count on. The yearlong program typically includes in-person meetings approximately every three months held on the UNC campus, during which participants work with expert coaches and update one another on progress with their performance challenges. (In light of the COVID-19 pandemic, current UNC Table Stakes meetings are held virtually.)

One such success story from our Table Stakes Initiative is that of Glenn Burkins and his QCity Metro, a digital-only news site that focuses on Charlotte’s African American community.

Twelve years ago, Burkins left his job as deputy managing editor at the Charlotte Observer and poured his energy, brainpower and life savings into QCity Metro. Burkins, who also spent years at The Philadelphia Inquirer and Wall Street Journal, risked it all to serve an audience he believed had been largely ignored. QCity’s content is free. The enterprise is fueled by ad sales and donations from readers.

“I’m working way harder for half the money,” he says. 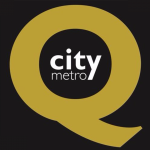 We know that traditional media have struggled this century to find successful business models, and it’s only becoming more complex. Local newspapers tried to manage declining revenues with aggressive cost cutting, which dramatically eroded community news coverage and created concern that an uninformed citizenry will lead to cracks in the foundation of American democracy.

When Burkins started QCity Metro, it was all on him: he wrote stories and sold ads. He developed the business plan. He also spent his own money to keep the dream alive, believing it would someday thrive because Charlotte’s African American professional class is big enough to make it financially viable. It’s been a long grind, Burkins says. But QCity was one of the first media outlet to focus on African Americans being disproportionally affected by the novel coronavirus, and his audience has grown with white readers.

When he joined Table Stakes last year, he knew it was time to step back from the daily grind long enough to see holes in his business plan, and to align his goals with the work he was putting in.

Now, Burkins is finally beginning to see improvement in his balance sheet. QCity has a sales and marketing officer and a managing editor to assist him in managing the enterprise, with a core group of 20 freelancers. He hopes to bring on two full-time writers soon.

Kind words from readers have several times saved Burkins from giving up.

“Every time I got to a place where I felt like I had to quit, get a job with benefits,” he says, someone would approach him in a restaurant or on the street and inquire if he was Glenn Burkins, then thank him for the news report.

UNC CISLM welcomed our fourth cohort of journalists to Table Stakes late this summer, and though we already know some of the challenges they face, the media industry is changing rapidly before all our eyes. Learn more about the Table Stakes Initiative here.