A key Table Stakes essential is partnering to expand capacity and capabilities at a lower and more flexible cost.

Several participants of the UNC-Knight Foundation Table Stakes Newsroom Initiative are accomplishing this by utilizing resources from the Report for America program. 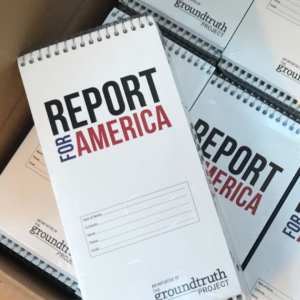 Part of the UNC Center for Innovation and Sustainability in Local Media (CISLM), the Table Stakes Initiative is a yearlong program that seeks to help media organizations identify and overcome challenges to succeed in the new world of digital media.

Modeled on well-known service programs like AmeriCorps, Report for America works by placing emerging journalists in underserved newsrooms around country, and then paying a portion of the reporters’ salaries while also offering them training opportunities. The reporters receive two-year placements, with the option of a third year.

“The crisis in local news — the shuttering of newsrooms and massive layoffs of staffers — has become a crisis for democracy. People don’t know what’s going on in their communities, which has led to lower voter turnout, less accountability in local government, even lower municipal bond ratings,” said Kim Kleman, national director of Report for America.

Laura Brache, a 2017 graduate of the UNC Hussman School of Journalism and Media, is serving her first year as a Report for America corps member covering Latinx issues for WFAE and La Noticia in Charlotte. WFAE, a public radio station in Charlotte, participated in the 2018-19 UNC Table Stakes program.

“I was craving the opportunity to make a real impact through my work, especially in the Latinx community,” Brache said. “After reading the Report for America FAQs on their site, it became obvious that this was a great opportunity for me to accomplish this goal.”

Report for America allows stretched-thin newsrooms a chance to create entry-level positions at a time when many media organizations have little budget for training early-career journalists.

Scroll down to listen to and read one of Brache’s WFAE stories.

“Report for America gives us some space to have someone get experience at less cost to us and the corps members have the opportunity to learn from the more experienced folks on our team,” Hoban said.

Carolina Public Press Executive Director Angie Newsome sees programs like Report for America as a way for newsrooms to continue to fulfill their missions at a critical moment in journalism’s history.

“Programs such as Report for America provide newsrooms like ours with the ability to continue to invest deeply in journalism that shines a light on the actions, inaction, wrongdoings and potential corruption of elected officials, government agencies and corporations in our state, issues that often exist — and sometimes thrive — in the darkness and shadows of our communities,” Newsome said.

For the reporters themselves, being part of Report for America gives a firsthand look at local news’ importance to the country’s civic health and future.

“Local journalism is the blood that runs through the big news networks. It’s food that fuels the beast that is media’s belly,” Brache said. “We are the ones on the ground building the relationships with the communities we work in. The work of local journalists has never mattered more.”

Learn more about the Report for America program.