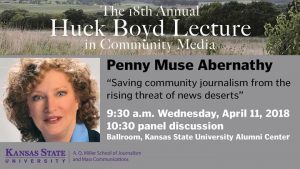 Knight Chair Penny Muse Abernathy delivered the 18th annual Huck Boyd Lecture in Community Media last week to an audience of journalists, media executives and concerned Kansas citizens. Afterwards, Abernathy appeared on a panel discussing life in a community after the demise of its local paper. Ned Seaton, editor of the Manhattan (KS) Mercury, wrote this editorial in response to her talk on “Saving Community Journalism from the Rising Threat of News Deserts.”

“Penny Muse Abernathy hit several nails on the head during her presentation earlier this week at Kansas State University. What she spoke about was the rising phenomenon of what she calls “news deserts,” places in America without a newspaper. The growth of those places is a serious threat to American democracy. That’s because a democracy requires people to be informed in order to make the necessary choices to govern themselves.

Television and radio stations, you might say, can provide that information. But Ms. Abernathy, a former New York Times and Wall Street Journal executive, pointed out that those are essentially entertainment media, and that they employ vastly fewer news reporters and editors than do local newspapers. Social media? Well, as we’ve seen, that has become an amplification device for malarkey, deception and fakery. It’s good for sharing pictures of breakfast, but you just can’t depend on it for real information.

The problem? As Abernathy pointed out, the internet — in the form of Google and Facebook — has siphoned off billions of dollars of spending by local businesses on advertising. So you end up with situations like what happened in Baldwin City, Kansas — the newspaper went out of business. A panel discussion about that followed Abernathy’s speech. The Chamber of Commerce representative lamented that it’s very difficult for businesses or citizens to communicate or to share community news as a result of the loss of that service.

So, what’s to be done? Abernathy, now the Knight Chair in Journalism and Digital Media Economics at the University of North Carolina, had suggestions for newspaper owners and editors: Find common areas of interest among citizens to attract new subscribers; find new sources of revenue by serving businesses’ marketing needs in different ways; and, most importantly, face the facts but remain optimistic. There’s a real threat to journalism and democracy, but, as Abernathy concluded, print newspapers are not dinosaurs. They’re not headed for extinction. They are figuring out, across the country, many different successful business models to serve their communities.”

In the panel that followed the speech, panelists discussed issues and potential solutions to covering a community without a newspaper. When the weekly Baldwin City Signal closed at the end of 2015, the city of nearly 5,000 people in Kansas was left without a newspaper. The nearby metro daily Lawrence Journal-World decided to halt the publication of the weekly paper after 16 years of coverage, and said it would wrap all reporting from the city back into the main paper.

Since that time, a news vacuum has emerged, and organizations from the local Chamber of Commerce to Kansas State University are taking notice.

“There is a large gap in not having a coordinated, consolidated central point of information,” said Jeanette Blackmar, manager of the Baldwin City Chamber of Commerce.

Entrepreneurs in and around Baldwin City see opportunities in filling the newspaper coverage void. Panelist Jay Wachs, owner of Briar Cliff Media in Lawrence and founder of audio streaming operation lawrencehits.com, brought an online radio streaming service to the city.

“We’re studying (the platform) to determine if the folks in a small town of less than 10,000 people will accept an app and a website to receive news, music, and information, rather than a traditional newspaper, which they’ve lost, a television station, which they’ve never had, and a radio station, which they have also lost,” he said in an interview about the panel with Channel 8 News.