Did declining newspaper circulation give president Donald Trump a boost in the 2016 election?

A Politico special report found a clear correlation between low subscription rates at the county level and Trump’s success in the 2016 election, both against Democratic candidate Hillary Clinton and 2012 Republican candidate Mitt Romney.

“Without having the newspaper as kind of ‘true north’ to point you to issues, you are left to look for other sources,” Knight Chair Penelope Muse Abernathy told Politico. “And because of the dramatic rise in social media, that ends up being your Facebook friends.” 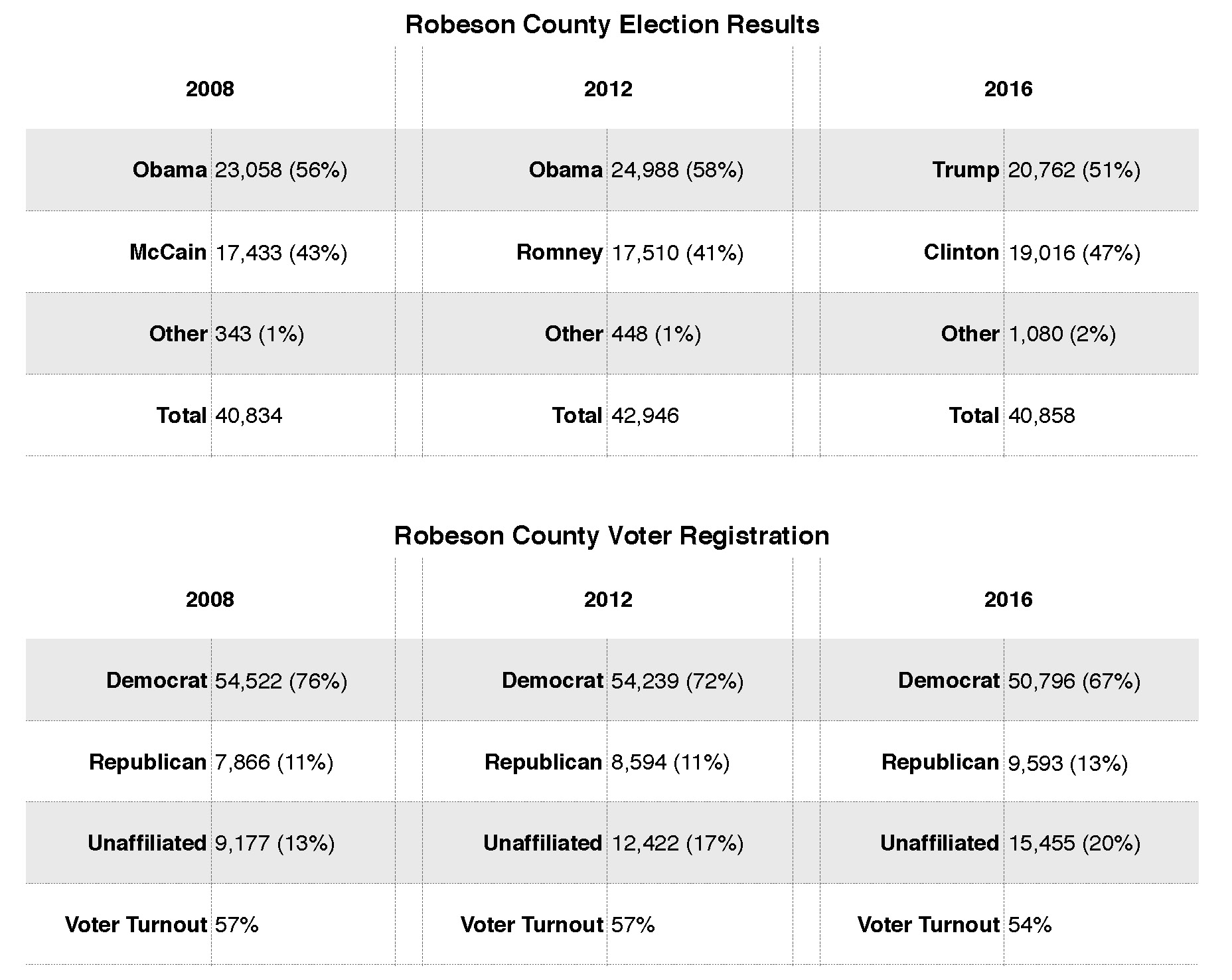 Politico also talked with Charles Broadwell, former publisher of The Fayetteville Observer. The Fayetteville Observer now reaches just 7 percent of households in Robeson County, and a change in ownership has pared down coverage even further. Shortly before the 2016 election, investment company GateHouse—the largest newspaper owner in the country—bought the paper from the Broadwell family. GateHouse has continued to cut back coverage from nearby Robeson County and other outlying areas to focus on Fayetteville.

“I’m concerned now as a citizen,” Broadwell told Politico. “You worry about whether people make a distinction between what somebody’s crazy uncle posts somewhere on Facebook and somebody doing the digging.”

The Fayetteville Observer circulation has fallen by half since 2008. The county is also covered by the daily newspaper The Robesonian; however, its most recent published circulation information comes from a 2006 audit.

A 2017 UNC Center for Innovation and Sustainability in Local Media report also found that investment-owned papers did not cover 2016 local elections as much as independently-owned peers. During the 2016 election, both The Fayetteville Observer and The Robesonian were owned by private equity-type investment firms. The Robesonian relied heavily on wire service reports, which included significant national coverage, while the Fayetteville Observer confined its coverage to national races and local elections with jurisdiction over Cumberland County and did not cover local elections outside its home county in great depth. 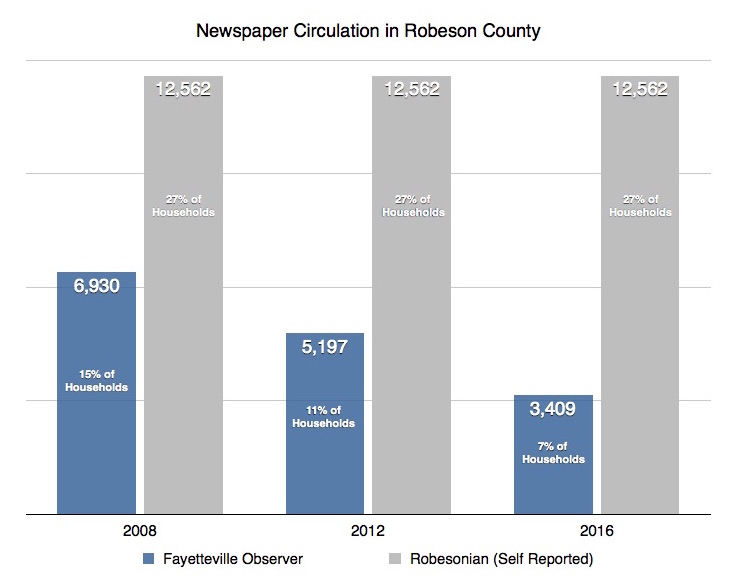 Forty percent of Robeson County residents are Native American, the highest percentage of any county east of the Mississippi. Nearly 31 percent of its residents live below the poverty line, compared to the statewide average of 17 percent. The unemployment rate is consistently higher than the North Carolina average, and October 2016 had both the highest unemployment rate compared to that same month in 2008 and 2012 and the largest difference between the state’s rate and Robeson County. 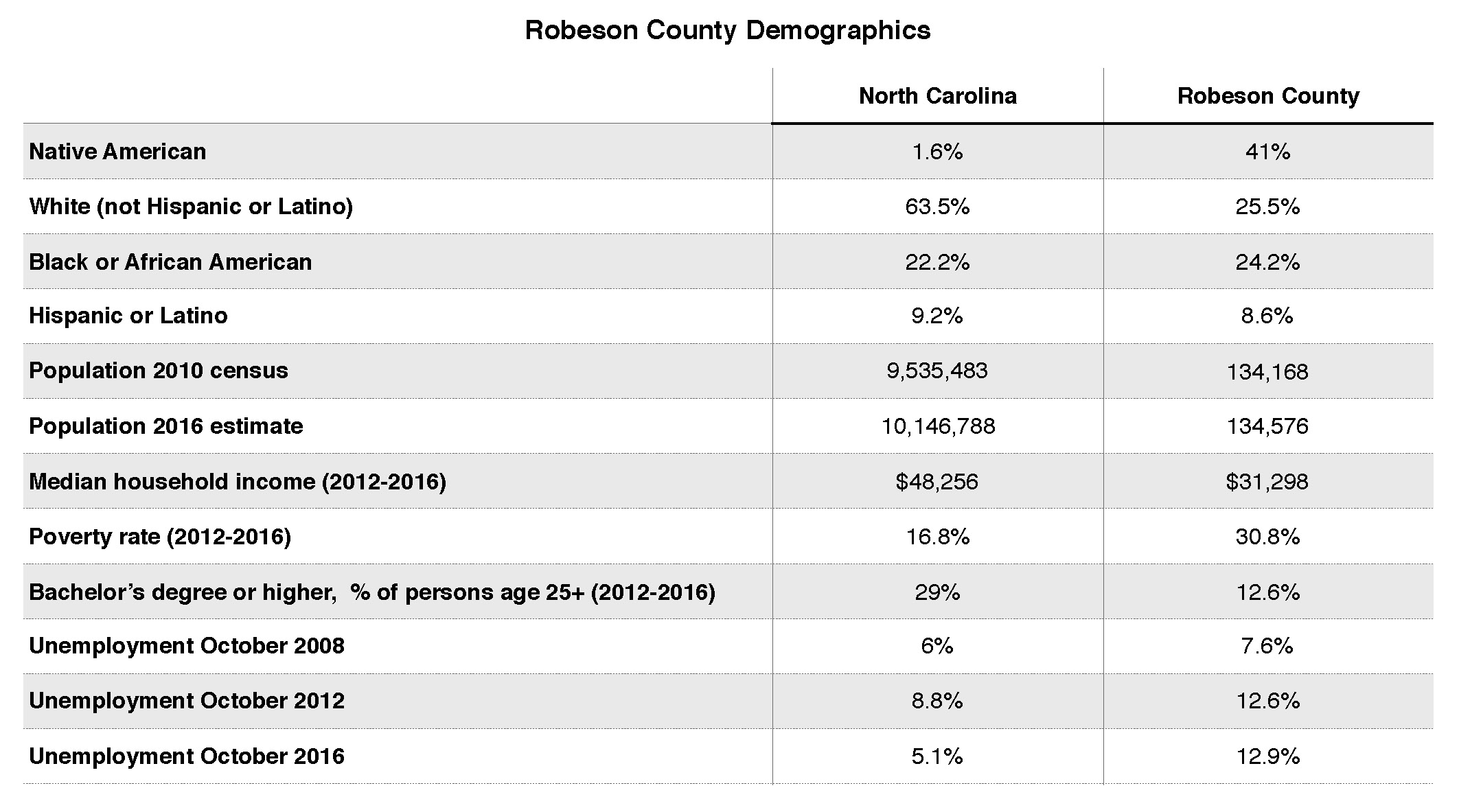 Here are other stories that highlight the political and demographic landscape of Robeson County:

The 9 Places That Really Mattered in 2016: POLITICO