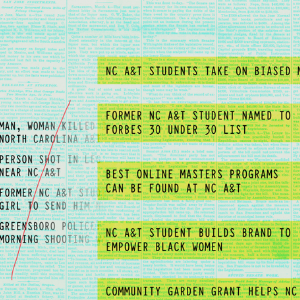 In 2019, North Carolina A&T State University students researched local news reporting in Greensboro and discovered that media outlets often used the institution as a locator for crime in its surrounding region.

Despite the crimes often being unrelated to the university, headlines like “Person shot in leg at convenience store near NC A&T” were harming the image of HBCUs and perpetuating implicit racial biases in the Greensboro region.

Further research revealed that N.C. A&T. wasn’t the only HBCU facing the issue — other schools in the country, like Howard University, were being falsely portrayed.

Alexis Wray, the then-editor-in-chief of The A&T Register, organized a meeting with six local media outlets to discuss the students’ findings. When media professionals weren’t responding to emails or phone calls, Wray would visit their offices in person.

The result? Greensboro newspapers found new ways to frame crime stories in their headlines, using street names rather than landmarks as locators.