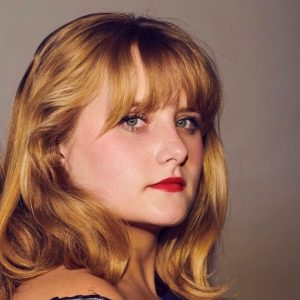 People with strong writing backgrounds might find numbers and programming daunting, compared to the familiarity of words and grafs.

She was introduced to journalism in 2016, during her first year of undergraduate studies at UNC. Thompson knew that she loved to read and write, but was unsure of which academic fields to pursue.

“I was struggling with some classes and was having a bit of an identity crisis,” she said.

She then rediscovered a book she read in high school, “Slouching Towards Bethlehem” by Joan Didion. Empowered by Didion’s work, Thompson took her first journalism class in sophomore year, captivated by writing and interviewing people.

The summer after her junior year, she interned at the (Raleigh) News & Observer, fact-checking for its political news desk. After graduating from UNC amidst a global pandemic in 2020, Thompson covered Washington politics remotely for The Dallas Morning News, where she befriended Alex Briseño, who was covering Austin politics.

Together, they collaborated on several stories, including Texas’ legislative process that eventually enabled college athletes to benefit off of their name, image and likeness.

“The first thing that people realize is that (Thompson) has a tremendous work ethic,” Briseño said. “The only thing that tops that is her infectious energy and positive attitude.”

Seeking a hiatus from Washington politics, Thompson shifted her focus toward local media. She started working at North Carolina Health News as a Report for America fellow, a national service program that places emerging journalists in local newsrooms to report on under-covered topics in 2022.

She covered gender and prison health under the mentorship of Rachel Piper, a Pulitzer Prize-winning journalist. Piper said Thompson’s zeal for local news may be her most valuable asset at CISLM.

“She’s very thoughtful about the community that she’s serving and telling stories that aren’t getting attention in other places,” Piper said. “She has that perspective of wanting news to succeed and seeing the value of local news.”

Thompson’s work at NC Health News eventually led her to apply to the Annenberg Data Fellowship, based in the Center for Health Journalism at the University of Southern California. There, she completed an intense, week-long crash course on a semester’s worth of data journalism.

Given Thompson’s rigorous experience in local news and data journalism, once she saw the job description of a CISLM Local News Researcher, she was instantly drawn to the position — utilizing data analysis to develop methods for local media outlets to succeed.

“Journalism is really important to democracy, keeping elected officials accountable, and it’s also important for having a sense of community,” she said. “But if it’s not reflecting its community… then it’s not really doing anything.”