La Tortilla may be the only newsletter of its kind in North Carolina.

It’s a Spanish-language weekly email with a conversational tone and a tight focus on politics and immigration, connecting Latinx readers across the state and beyond to important political news.

The newsletter is an important part of Enlace Latino NC’s mission: to get powerful, smart journalism into the hands of Latinx communities across North Carolina because everyone deserves to be informed. As one of only a few statewide Spanish-language publications for Latinx communities, it’s important to the leaders at Enlace Latino NC to reach as many people as possible. 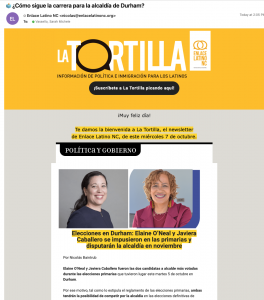 “The Latinx community in the state (of North Carolina) is growing very fast. It’s very big and complex and we don’t have one Latinx community — we have different communities within the larger community,” said Paola Jaramillo, co-founder and executive director of Enlace Latino NC. “We want more members of our community to know what happens here, in the General Assembly, in the government, in politics because everything affects the lives of everyone living here.”

For the nonprofit startup, that was proving to be easier said than done. As participants in the fourth cohort of the UNC-Knight Table Stakes program, its main goal was to attract more people to its Spanish-language reporting.

The team crushed it, blowing its goal out of the water — the outlet saw more than 100 percent growth in website users and Facebook followers from October 2020 to August 2021. But the subscriber growth for their weekly newsletter, La Tortilla, exploded, growing by 390 percent.

The La Tortilla subscriber list grew in a few ways. First, the organization became aggressive in asking for new subscribers across all their channels and started investing in an audience development tool, Pico. They sent a shorter version of La Tortilla to Facebook Groups and their WhatsApp subscribers for conversion opportunities.

Perhaps one of the best compliments for a newsletter: Nicolas Baintrub, an Enlace Latino NC reporter who runs the newsletters, said other organizations share the La Tortilla newsletter with their audiences because they find it useful themselves.

“It is a very powerful way of connecting with our audience,” Baintrub said. “We talk to our audience; the feedback is much better, they reply to us because we use conversational language.”

La Tortilla launched with a general news content but now focuses on politics and immigration. Through the Table Stakes coaching and aggressive experimentation, the Enlace Latino NC team discovered that a more narrow content focus was better than a wide-ranging newsletter, which is what La Tortilla covered in previous iterations.

Each week, the Enlace team comes together to decide what the most important topics are in the realm of politics and immigration, sometimes on a local level, sometimes at a national level. Then, Baintrub writes the newsletter in a conversational tone, encouraging readers to send feedback that is often used to create a more tailored, personal experience.

“Our (Table Stakes) coaches use this word, funnel, to turn occasional readers into people who support us,” Baintrub said. “A newsletter is a great way of achieving that goal.”

The newsletter — which has a four-minute-long average read time — not only connects Latinx readers across North Carolina and beyond to important political and immigration news, but it drives new readers to the Enlace site.

“Our (Table Stakes) coaches use this word, funnel, to turn occasional readers into people who support us,” Baintrub said. “A newsletter is a great way of achieving that goal.”

So they achieved their goal. What’s next? Jaramillo said Enlace Latino NC has already completed four sponsorships for the newsletter and is excited about future opportunities.

Enlace continues to grow its newsletter presence with a farmworker-focused newsletter called El Jornalero that connects farmworkers in North Carolina with organizations that serve them, which launched in June. Jaramillo said the organization is exploring a newsletter product based on audience needs for resources and explainers, such as how to get a driver’s license for new residents. 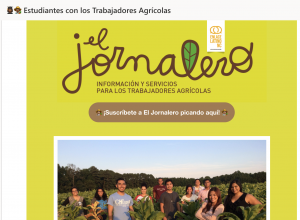 With the tools from Table Stakes, both Jaramillo and Baintrub said they feel well equipped for the future.

“(Table Stakes) changes the mindset of the organization,” Baintrub said. “To see a wide vision that you really want to achieve and then to find strategies to achieve that vision and believe in smart goals that you can tell you you’re on the right path — that way of thinking was the most valuable to us.”