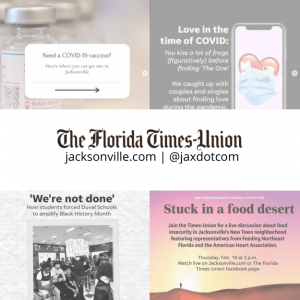 Emily Bloch figured social media would be part of her job when she started covering education and youth culture at the Florida Times-Union in Jacksonville, Fla. But she did not expect that a massive upgrade to the Times-Union official social media accounts would become central to the legacy paper’s work connecting with more diverse community members.

Bloch and The Times-Union team learned how to promote two-way interactions and engagement with key audiences during its participation in the UNC-Knight Table Stakes program.

As part of the UNC-Knight Table Stakes, a year-long newsroom transformation program run by the UNC Center for Innovation and Sustainability in Local Media and funded by the Knight Foundation, the Times-Union’s top goals were increasing community engagement and diversity in the newsroom.

“The focus was really rooted in Instagram being a platform with a more diverse audience, and really wanting to leverage that platform to reach younger, Black and brown audiences that they hadn’t been connecting with previously,” said Cierra Hinton, executive director-publisher of Scalawag and the Times-Union’s Table Stakes coach.

At first, the Times-Union set a goal that is typical for many teams: increasing their Instagram follower count from 17,000 followers.

But as the work progressed, the Times-Union realized they were not going to hit the specific follower count they had in mind. But they realized something more important was happening, Bloch said. The paper’s reach – the number of Instagram users viewing and interacting with posts – increased exponentially.

“The real value is that the accounts we’re reaching, and the content interactions, are soaring sky-high, further than we ever thought was even possible,” Bloch said. “So, while (new) followers along the way are nice, what we realized is that the actual quality of the engagement that we’re having with people that are already following us was so much more valuable and so much more true to our mission.”

The paper’s overall strategy evolved to center not just original content, like news stories, but to make sure that the community is aware of those stories and resources, Hinton said. They also got offline. During the Table Stakes program, the Times-Union hosted several community events meant to connect their work with their readers, speaking with more than 130 participants directly and engaging with more than 500 Jacksonville residents. 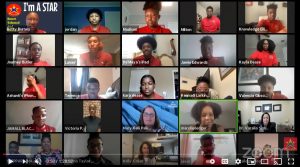 The Times-Union facilitated communication between the newsroom and readers to better understand them and their news needs. On Instagram, the team has utilized the platform’s Stories features to allow readers to ask questions, answer polls and give direct feedback.

When Bloch took a leadership role in running the social media accounts, it seemed like a natural progression. While covering youth culture, social media had previously played a part of her reporting process, as a method to communicate with sources or learn about current events, like with her coverage on high school students’ protests over dress codes and community concerns over a school’s “Bring Your Bible to School” social media posts.

Now, with the Times-Union’s accounts growing, the two-way conversation between the community and the newsroom is also growing. “So now that they’re tagging, not just me, but the actual Times-Union account, and they know that someone is there, and it’s not just a computer on the other side. They know that there’s a face there. I think it makes a huge difference.”

The Florida Times-Union experience shows why newsrooms should invest in social media and community engagement strategies, Hinton said. “They really show that even if you do work for some of these bigger, more corporate newspaper entities and traditional mainstream newsrooms… you can still have a really rich, deep audience engagement strategy, and that it will not only yield meaningful results for your bottom line, it will also yield meaningful results for your connection with your audience,” she said.