One hot afternoon this summer, Staunton News Leader Government Reporter Akhil Ganesh was hard at work on the job.

He wasn’t covering the city council, nor was he penning down notes at a school board meeting. Instead, Ganesh was knocking on doors with fellow reporter Katelyn Waltemyer at Staunton’s apartment complexes, trying to figure out what issues were most important to the residents of the town he covered. 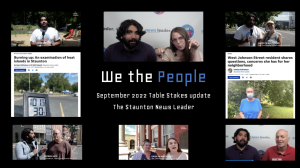 Staunton is a town of just over 20,000 nestled in the Shenandoah Valley, bordered by the Blue Ridge Mountains to the east and the Ridge-and-Valley Appalachians to the West. The News Leader, a small Gannett-owned daily and member of UNC Table Stakes cohort five, is on a mission to transform how it covers Staunton’s government.

“The politicking that goes on, on like your normal city councils, we wanted to get away from that,” Ganesh said.

Ganesh was hired to the newsroom in November 2021 as a social justice reporter, but soon his day-to-day shifted so that his work fell more in line with the goals of the paper’s newest project — the “We the People” government reporting initiative. 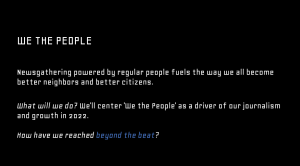 “Newsgathering powered by regular people fuels the way we all become better neighbors and better citizens,” according to the newsroom’s Table Stakes’ North Star vision.

The UNC-Knight Foundation Table Stakes Initiative helps news organizations across the Southeast tackle their biggest challenges, such as audience growth or revenue development. For The News Leader, their challenge meant working with each other and with their Table Stakes coach to engage more readers — not politicians — in the process of watchdog reporting.

The newsroom is tracking how many readers choose to subscribe after they read “We the People” coverage. So far, the News Leader is on track to reach its goal of increasing new subscribers from government stories by 40 percent.

Government sources typically lean on jargon and vague speech that don’t add much to a story, said Jeff Schwaner, storytelling and watchdog coach at the News Leader. “The government beat, it can be one of the most boring beats in any newspaper,” he said.

Through this revamped way of telling the stories of its community, the News Leader has turned the once-drab government beat into one that is drawing new readers to the paper.

“We’re focused on what constituents of government, the people in control of the local democracy, want from their elected representatives,” said William Ramsey, the executive editor of the News Leader.

In practice, that means no more general recap stories of council and commission meetings. Instead, the News Leader focuses its reporting around speakers at the public forum or simply uses the meeting as context for a more community-focused story.

The goal is to limit the focus on the politics and in-fighting that takes place during meetings — details that, practically, don’t affect the everyday lives of Staunton residents, Schwaner said.

“I wouldn’t want to find the government official to explain to me why they voted ‘yes’ or ‘no’ about something, I would want to find the person whose life was, you know, really strongly changed by that person’s casual decision,” Schwaner said.

Several important stories have been born out of the tenets of “We the People.” This summer, the newsroom took part in a USA Today project on urban heat islands, investigating which areas of Staunton are most impacted by increasingly hot summers. An east coast-wide collaborative story from the USA Today Network about heat islands will be published later this fall, stemming from this work.

Because of the door-knocking initiative, Ganesh and Waltemyer learned of problems with speeding on several neighborhood streets. Waltemyer also pioneered a new series she called “You asked, we answered,” in which she investigated questions asked by Staunton residents.

Reaching and sustaining this level of community engagement is increasingly difficult given the turnover found in national newspaper chains. Waltemyer has since left for another job, while in April, Ramsey was put in charge of investigations and enterprise in the Atlantic Region of the USA Today Network.

Still, according to Ramsey, the News Leader is just getting started in terms of the watchdog reporting that he hoped would result from “We the People.”

“I feel like, in a way, we haven’t done our most important stories yet,” Ramsey said.