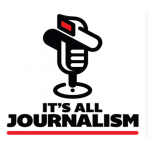 Michael O’Connell of the It’s All Journalism podcast caught up with Penny Abernathy on Nov. 19 for an interview after the UNC Knight Chair in Journalism and Digital Media Economics’s moderation of a panel on the future of local news at the Gallup World Headquarters in Washington, D.C. The panel discussion referenced the latest research from the John S. and James L. Knight Foundation and Gallup on Americans’ perceptions of local news’ sustainability.

During the podcast, O’Connell gets Abernathy’s take on the panel discussion, “Public Good or Private Enterprise,” which explored policy implications of the local news crisis, such as the confrontation a new landscape in which local journalism will need to be supported by a diversity of funding sources.

“We all have a stake in whatever replaces the 20th-century version of the local newspaper,” Abernathy tells O’Connell during the podcast.

Listen to the full podcast below.