For the past decade, the number of family-owned newspapers has drastically dropped as the business of owning print media becomes less profitable. The vast majority of newspapers are bought by large investment entities with millions, sometimes billions, of dollars in assets of wide-ranging businesses and groups. However, there is an outlier in this trend: Adams Publishing Group.

The company, owned by billionaire investor Stephen Adams and his family, has only been in the newspaper industry for three and a half years but they are the fourth largest media company in terms of papers owned, according to a database maintained by the University of North Carolina at Chapel Hill’s Center for Innovation & Sustainability in Local Media.*

They began by buying 34 papers spread across Minnesota, Wisconsin, Ohio, and the Chesapeake region, from American Consolidated Media. Since then Adams Publishing has purchased more than 80 newspapers, and by November 1, 2017, it owned around 120 papers – mostly weeklies and small dailies located in the Southeast and Midwest but expanding to the West, according to UNC’s database.** 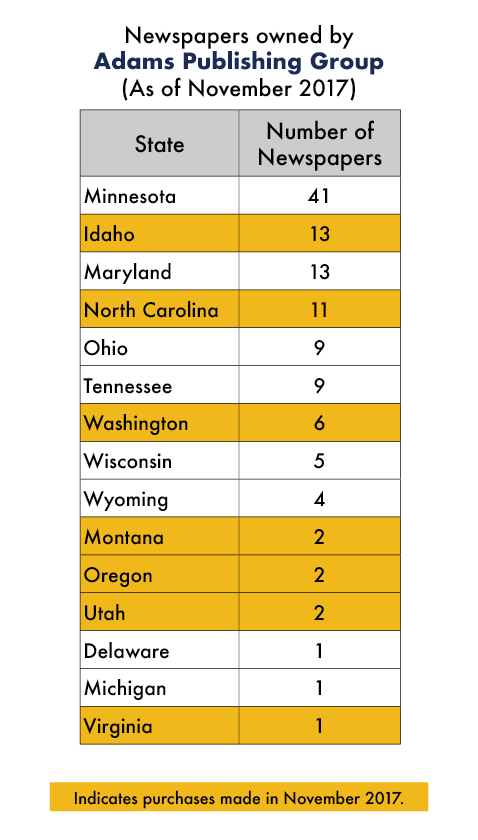 That makes one wonder, who are the Adams family and why are they purchasing newspapers at the rate of much larger investors? A recent Poynter article explored the family in an attempt to answer that question.

Read the full profile here for an interesting and unusual newspaper ownership story.

* The University of North Carolina at Chapel Hill’s Center for Innovation and Sustainability in Local Media maintains a database of national newspapers. This database, which includes more than 7,000 entries, draws on data from state press associations, Editor and Publisher and press reports of media sales.

** This database excludes shoppers, editions and specialty publications, which explains the discrepancy between the numbers UNC uses to measure Adams Publishing’s newspaper holdings and the number listed on the company’s website.