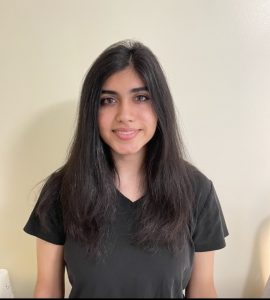 Uma Bhat’s career in journalism began as a first-year at Green Hope High School, chasing the school’s newspaper adviser down the hall.

She wasn’t allowed to join as a first-year because The Green Hope Falcon newspaper was a program only for sophomores and above. But that didn’t stop Bhat. She was able to convince the former newsroom adviser, Joshua Kesterson, to publish her first article during her first semester. The rest was history.

Now, as a first-year at the University of North Carolina majoring in Media and Journalism, the Cary-native is furthering her interest in local media as a communications & operations intern at the Center for Innovation and Sustainability in Local Media.

“Local media plays an important role in fostering a sense of community — it’s the string that ties every little bead together,” Bhat said. “National news media highlights stories that affect us on the large scale, but local media highlights your home — the people who you live with, the stores you shop at, the representation for your neighborhoods, etc., etc.”

Eventually becoming one of the editors-in-chief her senior year of high school, Bhat helped to spread the story of Green Hope High School through tough questions and engaging stories, Kesterson said.

“She always tried to tell stories that others were not,” Kesterson said. “They might not have been directly related to the school but always involved the community of the school.”

He said Bhat was curious and inquisitive, always trying to give the story justice and always thinking bigger.

Bhat said her dream for local media is for people to see its value.

“Local media should make you feel as if you’re interconnected with the rest of your community,” Bhat said. “Sometimes it can feel like local media exists solely for crime reports and traffic pointers — rather, its purpose is to bring together members of communities and draw their attention to relevant issues.”

On top of interning at CISLM, Bhat holds a leadership position with WRAL-TV’s Post 5 Program, which she’s been a part of since her junior year of high school. The program for students teaches its participants about all aspects of television broadcasting.

“Working with the program has made me more appreciative of the RDU community (where I’ve grown up) every day,” Bhat said.

Steven Elizondo, the Post 5 Adviser, said working with Bhat has been a pleasure.

“She is very inquisitive, and always sticks to what she’s learning at UNC to determine how she best approaches her role with Post 5,” Elizondo said. “Uma is one of our core leaders, and always takes the initiative to follow up and deliver on every project she takes on.”

At CISLM, she’s already brought some of her own ideas to the table and is making them a reality, working with participants from the UNC Table Stakes program and with the North Carolina Scholastic Media Association to help other high schools and college journalists get connected with local news.

Bhat hasn’t quite decided what she wants to do after graduation, but she’s sure that being at the journalism school has helped.

“I think Hussman has helped me grow even more comfortable in my choice to head somewhere in the media and entertainment industry.”