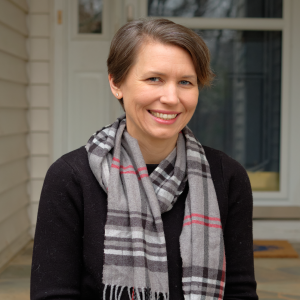 During Erica Beshears Perel’s two decades in the news industry — as a reporter, educator and executive — change has been the constant, as news has become increasingly digital and traditional revenue sources have shifted.

The changes motivate Perel, a 1998 graduate of the UNC Hussman School of Journalism and Media, as she moves into a new role leading its Center for Innovation and Sustainability in Local Media.

Perel takes the helm at CISLM in April after 13 years with The Daily Tar Heel, UNC’s student newspaper, where she serves as general manager. Previously, she served as the DTH’s newsroom adviser and director of the 1893 Brand Studio, the newspaper’s creative services and content marketing agency.

Before coming to the DTH, she worked as a reporter with The Charlotte Observer, covering a variety of local news beats including government, growth and development.

“Erica was a top-notch journalist for The Charlotte Observer when she was here — thorough, objective and compassionate. She dove into stories headfirst, and you knew when reading her work that you could trust it, and her,” said Scott Fowler, a sports columnist at The Charlotte Observer. “It was a loss for our newspaper the day she walked out the door, but those same qualities served her so well at the DTH and will do so in her next job at UNC Hussman as well.”

Throughout her career, Perel has seen firsthand the issues CISLM tackles, such as how to stay relevant and sustainable in a digital age as traditional sources of revenue like print subscriptions and advertising dwindle.

“CISLM has helped change the conversation on local news — from one of losses to one of wins and opportunities,” Perel said. “I am so grateful for this opportunity to be a part of the center’s work.”

Founded in 2015, CISLM supports both traditional and emerging local news organizations with research and programs like the UNC-Knight Foundation Table Stakes Newsroom Initiative.

“Erica has shown amazing vision in preparing the DTH for a completely changed digital news environment,” said Susan King, dean of UNC Hussman. “She will now offer so many more news organizations that same kind of strategic vision and opportunity. I’m excited to have her running the center and working closely with our Senior Associate Dean for Strategy and Administration Louise Spieler.”

The Knight Foundation affirmed the CISLM’s work and invested in its future with a $2.23 million grant renewal in 2020.

Perel’s work with student media informs her with a sharp insight on journalism’s future — a perspective she brings to her new role at UNC Hussman. “The people who are in college now are going to be the news consumers of the future,” Perel said. Perel credits her leadership roles at the DTH with making her an inclusive, servant leader.

“I wouldn’t be the journalist I am today if the DTH didn’t have someone at the helm so dedicated to lifting up students,” said Anna Pogarcic, the DTH’s current editor-in-chief. “Anyone looking at the DTH can see that we’re in a much better place now than when she first took over as general manager, and I think the staffers of my time will always be grateful to her for that.”

The DTH was also formative in Perel’s college experience. She became a DTH staffer as a freshman and by the time she was a senior served as the newspaper’s editor-in-chief — invigorated by the big, impactful decisions she and the other student staffers made daily.

“It was being part of something bigger than myself,” Perel said. “Journalism is the most collaborative act possible.”

“Erica has always had a deep passion for journalism – as an editor, an educator and a publisher. As long as I’ve known her, success means making the people around her better,” Thornburg said. “Yes, she cares about journalism, but more importantly she cares about the communities that local news reporters serve.”

Perel will also bring a unique perspective to CISLM’s UNC Table Stakes initiative. The DTH took part in the second cohort of the program, which helps advance media organizations through digital transformation and development of sustainable business models.

Through the yearlong program, coaches helped the DTH develop new audience- and revenue-generating ideas such as the Rivalry Challenge, a now-annual fundraising challenge between the DTH and The Chronicle, Duke University’s student newspaper, leading up to a UNC-Duke basketball game each season.

“The UNC Table Stakes program, especially the coaching, really helped me prioritize my work at the DTH, as well as think about who our audience was and how we could reach them,” Perel said.

Now in its fourth cohort, the UNC Table Stakes program has served over 40 media outlets throughout the U.S. Southeast.

“What excites me about local news is that there are so many different types of success stories,” Perel said, pointing to examples from past UNC Table Stakes participants, such as Scalawag Magazine’s turn toward movement journalism and the audience engagement work of EducationNC.

“I very much believe in news as an ecosystem. I think CISLM should exist to repair the ecosystem of local news … and there’s not going to be one answer, there’s going to be lots of different answers,” Perel said.

Where are the gaps in local news coverage?
Why are they there?
What can be done to fill them?

The questions are big and challenging, but Perel sees a hopeful future for local news, and she brings that vision and focus to her new position as director of the Center for Innovation and Sustainability in Local Media.