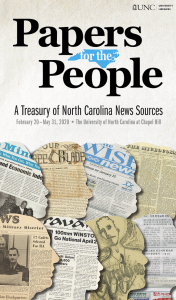 Abernathy studies “news deserts” — communities with limited access to credible and comprehensive news — and the innovative business models targeting them in her research at the Center for Innovation and Sustainability in Local Media, located within the UNC Hussman School of Journalism and Media.

“Think about a newspaper as a community builder and a problem solver,” Abernathy told the crowd gathered for the opening of the “Papers for the People: A Treasury of North Carolina News Sources” exhibit as she spoke about journalism’s future. “There’s a real need to think about what type of news we need now.”

Abernathy noted a link between the specialty written publications featured by the exhibit and the hyperlocal and special interest news startups, many now online, starting to fill the void left by struggling legacy news organizations.

“I think we’re going back to that model across the hall,” Abernathy said.

Across the hall, the exhibit — on display until May 31 — featured 45 specialty North Carolina newspapers, newsletters and news magazines carefully curated from the library’s collection, ranging from handwritten 1800s newspapers produced as hobbies to social movement publications reporting on the nascent civil rights and women’s movements of the 20th century.

“We’re collecting the history of the past, but we always try to tie into the present and look to the future. Often, UNC faculty provide us with that perspective of the future,” said John Blythe, assistant curator of the North Carolina Collection, of Abernathy’s speech at the event.

Abernathy told the crowd that the past decade has been a rough one for the newspaper industry, especially local news, after the 2008 recession and digital competition dried up advertising dollars and audience, shuttering scores of newsrooms and leaving many struggling newspapers selling out to large corporate chains.

Presently, more than 200 counties nationwide are without a newspaper and half of all U.S. counties, more than 1,520, have just one — usually a weekly, according to Abernathy’s research.

But there’s hope. Abernathy looked to the future as she spoke about her excitement of creative new business models, such as the revenue diversification employed by local newspapers like The Pilot in Southern Pines, North Carolina — which now owns a book store and produces several magazines as well as a newspaper — and online news sites using the latest technology to reach their communities.

“We’re only 20 years into the digital era. What are the possibilities?” Abernathy said.

Watch Christian Edwards, assistant keeper for Wilson Library’s North Carolina Collection Gallery, talk about why curating the “Papers for the People” exhibit was personal for her.

“The papers in our exhibit not only informed and connected communities, but empowered them,” she said. “What really struck me is not only the value these papers provided to their readers but the value they provide to researchers today about the lives of everyday North Carolinians.”

The exhibit’s opening event was co-sponsored by Park Library.

The exhibit will be on view through May 31 in the North Carolina Collection Gallery of the Wilson Library.