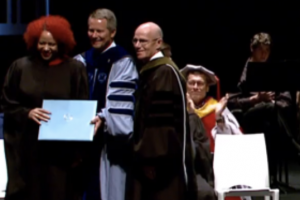 At this year’s University Day celebration on Oct. 12, 2019, Carolina presented UNC Hussman School of Journalism and Media master’s alumna and former Park Fellow Nikole Hannah-Jones ’03 (M.A.) with one of its 2019 Distinguished Alumna and Alumnus Awards, which honors alumni who have made outstanding contributions to humanity.

Noted by her award citation as a “passionate advocate for equality in truth-telling,” Hannah-Jones is an award-winning investigative reporter covering civil rights and racial injustice for The New York Times, a MacArthur “Genius” Grant Fellow, winner of a National Magazine Award and co-founder of the Ida B. Wells Society for Investigative Reporting, a training and mentorship organization geared toward increasing the numbers of investigative reporters of color.

Earlier this year the society – named for Ida B. Wells, a pioneering black investigative journalist in the late 19th and early 20th centuries – announced its affiliation with the Hussman School.

Hannah-Jones was also the keynote lecturer for an event celebrating the 95th anniversary of UNC’s Howard W. Odum Institute for Research in Social Science on Oct. 11, 2019. In her address, she talked about “The 1619 Project,” a print and multimedia initiative she led at the Times examining the legacy of slavery in the United States, which began 400 years ago as the first enslaved Africans were brought into the country.

The project is “a radical reframing of the way we understand our narrative of our history,” she said in her address. “We have the information; we just have not decided to center it in that way.”