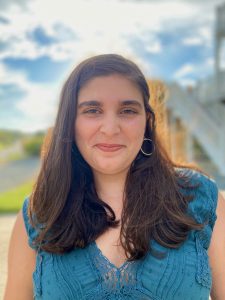 Most people pick up their phone after getting off work, but when Katelyn Chedraoui clocks out for the day, she turns her phone off.

Chedraoui, communications intern for the Center for Innovation and Sustainability in Local Media, is a junior in the UNC Hussman School of Journalism and Media, majoring in advertising and public relations. She’s worked at CISLM since August 2021, where among the biggest of her duties is managing the center’s Twitter account.

A typical day’s work might require Chedraoui to be on Twitter for multiple hours, promoting CISLM’s initiatives, retweeting media-related stories and curating a weekly thread of local news jobs.

As the senior-most intern at CISLM, Chedraoui has grown into a de facto leader of the group. She approaches her job with independence and is willing to experiment to see which types of posts perform best.

Outside of running CISLM’s Twitter, Chedraoui has also written pieces about local media outlets from across the Southeast, such as a story on the Knoxville News Sentinel’s mission to build back trust with Black readers. All of her work is driven by her ability to connect with others.

“She really takes the responsibility to get to know people, and she’s really invested in trying to get CISLM to be a good place to work for everyone,” CISLM Director Erica Perel said.

It wasn’t until Chedraoui’s first year at UNC, when she started doing audience engagement work for The Daily Tar Heel, that she fully realized social media’s applications in the business world and the career opportunities surrounding it. She’s since worked as a summer intern at Volvo Group and will be working at Red Ventures as an editorial intern in summer 2022. She is also on the social media team for Coulture, a student-run fashion magazine.

One of Chedraoui’s favorite things about her many different jobs is that they all served different audiences. It’s made her consider what traits all audiences have in common and what makes certain audiences unique. Whether it’s at The Daily Tar Heel, Coulture, Volvo or CISLM, she knows how to tap into the interests of each group.

“Being able to work to understand your audience really gives you this deeper understanding and this deeper appreciation for the people you’re trying to serve,” Chedraoui said. “And it really helps put everything into perspective.”

Having that appreciation for her target audiences, combined with the creativity and know-how required to communicate with them, is what makes Chedraoui so good at her job, her coworkers say.

“She’s really creative and really straight to the point and direct,” said Shelby McLamb, a coworker at Coulture. “And that is my favorite type of person to work with.”

When all is said and done, there’s not much time she’s able to allocate to her personal accounts.

Instead, she might relax by reading a good book. She’s particularly interested in topics related to her women and gender studies minor. Or perhaps she’ll listen to some Taylor Swift, her favorite artist, or sit down to crochet, a skill she just recently taught herself over winter break.

“When I’m not working or I’m not doing classwork, I try really hard to stay away from screens and social media,” Chedraoui said.

And when Chedraoui does use social media for her personal use, she says it’s hard to turn the strategy part of her brain off.

“I’ll definitely be like, ‘Oh, I’ve been posting a lot about this and nobody’s responding. Maybe I should switch it up,’” Chedraoui said with a laugh. “Yeah, that’s embarrassing, but it’s 100 percent true.”

She doesn’t spend much more than 30 minutes per day on her personal accounts. Setting those limits is essential for her to create a healthy work-life balance.

“Traditionally, people use social media as a way to escape their work,” Chedraoui said. “So when it is your work you have to be really firm with yourself about setting boundaries.”