With increased numbers at the polls, young voters were pivotal in the 2020 election.

According to numbers from the Center for Information & Research on Civic Learning and Engagement (CIRCLE), 61 percent of people aged 18-29 supported President-elect Joe Biden, with analysis suggesting an increase of as much as 10 percent in youth voter turnout and high engagement in key battleground states like North Carolina. 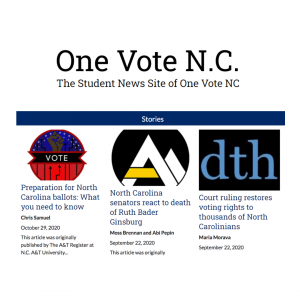 One project doing its part to increase youth voter turnout was One Vote N.C., a news collaborative of seven college media organizations formed and spearheaded by The Daily Tar Heel, a participant in the 2018-19 UNC-Knight Foundation Table Stakes Newsroom Initiative.

One Vote N.C., which utilized the key Table Stakes principle of collaboration, also included the N.C. college media organizations The Appalachian, The A&T Register, Technician, The Chronicle, The East Carolinian and The Niner Times.

The UNC Table Stakes initiative is a yearlong program run through the  Center for Innovation and Sustainability in Local Media at the UNC Hussman School of Journalism and Media, which provides media organizations with professional coaching to survive and thrive in the digital age.

“The Table Stakes’ emphasis on collaboration — that we’re stronger together — was a big part of this project’s beginnings,” said DTH General Manager Erica Perel, who explained that she and DTH Editor-in-Chief Anna Pogarcic thought of the One Vote N.C. idea last year when Pogarcic served as the DTH’s city & state editor.

Perel and Pogarcic wanted to cover the 2020 election in a way that really pushed students to the polls.

“I’ve wanted students to understand that if you don’t vote nothing with change,” Brennan said.

Also, as COVID-19 shut down campuses, it meant students were going to school virtually from counties across North Carolina, making One Vote N.C.’s statewide coverage even more important, Brennan said.

“It was more important than ever to be a resource for students,” said Sonia Rao, the current DTH city & state editor who led the One Vote N.C. project. “I hope and think this collaborative empowered students across the state to vote.”

Rao said she also hoped One Vote N.C. helped students understand the importance of local races, which can have more bearing on day-to-day life than national races. “It’s really important to vote all the way down the ballot,” Rao said.

One Vote N.C., with its website, printed and online voting guide and other multimedia features, represented another Table Stakes principle — serving targeted audiences with targeted content.

“A lot of our coverage focused on the nuts and bolts of voting,” Perel said, noting that barriers to voting were often basics like where and how to cast ballots.

However, student voters weren’t the only ones learning, so were One Vote N.C.’s student journalists.

Chrissy Beck, general manager of Duke University’s The Chronicle — a 2019-20 UNC Table Stakes participant — said that while One Vote N.C. educated students about voting, the collaborative also taught its student journalists about reporting during a difficult and unprecedented time.

“One Vote N.C. has really fostered a sense of community and purpose in an otherwise isolated time. We’ve really enjoyed being a part of it,” she said. “The magic of the Table Stakes program is that good ideas get done.”